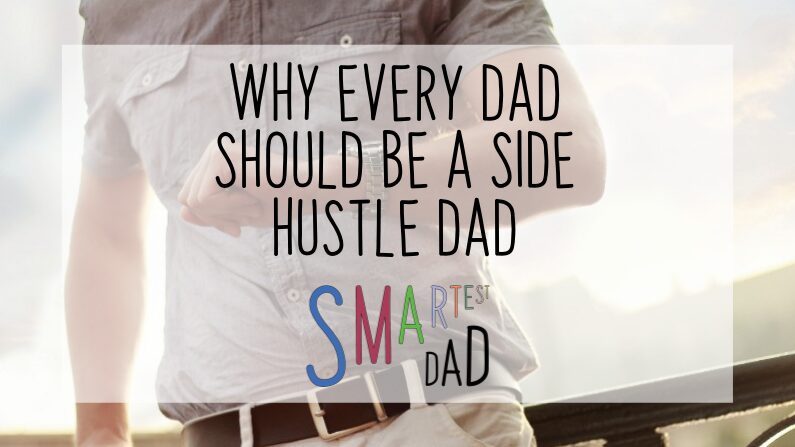 I was recently reading an article during Lifehacker’s “Rejection Week” about rejecting the side hustle and found it somewhat troubling. Despite the author’s heart being in the right place, I think that, when it comes to new dads, every dad should be a side hustle dad.

The idea that you should use non-work hours for more work sounds like a bad idea. And there’s some truth to that, but there are really some good, dad specific, reasons a side hustle makes a lot of sense.

You just have to approach the whole concept with the right frame of mind. Some are obvious from a financial perspective, but most of the reasons why every dad needs a side hustle.

1. Extra Cash for the Side Hustle Dad

This is a big one. The first step to solving a problem is to recognize that there is one. And there just isn’t enough money in our bank accounts right now.

There’s no question kids are expensive. Everything about them is expensive. Guess how much you think it is going to cost to raise your kid. Now double it.

On top of that, nobody is saving anymore.

That is an incredibly stressful statistic. You can do all of the meditation and mantras you want to reduce your stress levels, but there are other ways to deal with that problem.

It just makes fiscal sense that every dad has a side hustle to bring in a little extra cash to save for a rainy day.

And you don’t just have to sock it away for when the storm clouds are gathering. Having a bit of extra cash means being able to take the family out for an unplanned meal out of the house, an extra gift at your child’s birthday, or maybe, just something special for yourself.

The whole point of the side hustle is to make your life as a dad easier. It’s not all doom and gloom.

2. Get All Your Eggs Out of One Basket

Having a boss sucks. Having a boss you can’t get away from sucks more. But you’re going to suck it up as a Dad, because, you’re a good dad, and your kid is more important than your happiness. That’s why you would consider being a side hustle dad in the first place.

But you don’t have to choose between your child and your own happiness when it comes to career fulfillment.

You can look at a side hustle a couple of different ways. You are your own boss, or you have many bosses, by way of clients. Either way, you have the ability to fire a bad client (or miniboss if you will).

Surely, the only way to get ahead and do so with peace of mind is to get all of your eggs out of a single basket.

This does piggyback on point number two a bit, in much the same way two picks up on point one. It all comes down to freedom. More money buys a lot of freedom.

Imagine being able to take your kids on amazing, year-long, excursions. Vacations are so limiting. They’re finite trips that have a well-defined end. And, honestly, they don’t do a whole lot in the area of stress relief.

Much better is to live a life of purpose and intention. Not being stuck at a job you hate, with a boss you can’t stand, goes a long way towards making that type of life a reality.

The idea that you’re going to go to school, graduate, get a job, put in a career, and retire with a gold watch is as antiquated a notion as the horse and buggy.

There’s a common refrain that jobs are being outsourced and that’s something that can be halted with trade policies. Obviously, a policy change can help a bit, but there’s a much more pressing factor that’s affecting job trends in the United States.

John Oliver just did a great segment on the future of automation on his show, Last Week Tonight.

Cashiers, clerks, mail sorters, tellers, and even customer service agents are all jobs that aren’t going to be around. The clear conclusion is we’re facing career opportunities that are shrinking.

The average person will change careers 12 times. That’s stressful. Better to start early and be a side hustle dad. At worst, you’re going to ease the stress of job changes. At best, you’ll avoid the issue altogether.

5. Engage Your Side Hustle Dad Passion

I’m absolutely playing loose and fast with the word “passion” here. You just have to do something you don’t hate.

Did you know that only 30% of workers in America feel engaged at work? Yeah. That means seven in ten of us aren’t engaged. That’s a fancy way of saying we hate our jobs.

There are a ton of reasons why that’s the case. Lack of recognition, or not being challenged come to mind. One fascinating tidbit was that money doesn’t top that list. It’s actually pretty far down.

You just have to do something you don’t hate.

Taking up a side hustle allows a Dad to spend their time and energy on something they might actually like doing. Think of it as a hobby, but one that makes money.

Now, finding one’s passion is no small feat. There is any number of career coaches and counselors that will help you to find your passion, but it doesn’t have to be all that hard.

It just takes some time and introspection. After all, the unexamined life is not worth living, so, taking a good hard look in the metaphorical mirror from time to time never hurts.

Write down everything that you do at your job now. Not just your job title, but what actually goes into doing your job on a day to day basis.

Now rank those tasks, skills, and talents in terms of how much enjoyment they bring you. Maybe you are a teacher, but you really enjoy organizing your classroom. Or, you work in the mailroom, but you like fixing the copy machine that’s always breaking down.

The reason to focus on what you’re already doing at work is that those skills and tasks are already related to making money. Someone is already paying someone to do those tasks… you.

So, take what you’re already doing and see if you can identify some current skills that can translate into some after-hours freelance work.

6. Being a Side Hustle Dad Teaches Your Kids Entrepreneurship

There’s a myth that entrepreneurs are born. Some might have a leg up, or a “legacy” admission to entrepreneur school, but, none are born.

Leverage and outsourcing. Risk-taking, sales, and assertiveness. These are all lessons that can be learned. Lessons that I learned much later in life than, in retrospect, I’d have liked.

Entrepreneurship and the self-advocacy that goes along with it is going to be something my son learns early and often.

Being a side hustle dad is a great way to teach yourself these skills in a relatively low-risk way so that when it comes time to pass these life lessons along, you’re well positioned to do so.

7. Get Used to Failure and Rejection

Want to know how to succeed? Then learn how to fail. Learn to fail, get back up, try, and fail again. As a side hustle dad, you will fail. It’s inevitable.

I learned the importance of failure on a skateboard. Hours of pushing, slamming, wincing, and getting back up to do it again was a prerequisite to even the smallest amount of progress. I wasn’t very good though. Sure, there’s talent involved in most successes, but I’ll take resiliency over talent any day.

Now you’ve been teaching this lesson to your child for a while now. You know that story about the tortoise and the hare you’ve been reading at bedtime? Well, it actually works.

What Changes Over Time?

For some reason, as we go through school, that lesson gets beat out of us. We get conditioned to do what we’re “supposed” to do. We learn to keep our heads down, give the right answer, and to take the fewest risks possible in order to avoid failing.

Kids learn to become conservative in their learning style. From the earliest stages of our learning experience, we’re geared to get the best grades and give the right answers so that we can get into the best schools and get the best jobs.

This process beats risk taking out of us.

Without risk-taking, there isn’t any progress. We admire inventors like Thomas Edison who failed countless times before he invented the lightbulb, but we don’t teach our kids to take those risks in school.

As a result, by the time you get to be a dad, there’s a good chance your risk-taking muscle has atrophied quite a bit.

Being a side hustle dad will help you exercise and to rebuild that muscle. You’re going to fail a lot when starting a side hustle. But, as time goes on, failure won’t hurt as much, until, finally, it’s no big deal.

That’s the side hustle breakthrough. Once you stop feeling wounded by failure, you will be able to analyze what went wrong. Then you can fix it for next time.

What’s So Bad About Side Hustles Again?

In short, there’s no reason not to be a side hustle dad.

A side hustle gets you the following:

And, finally, a side hustle gets us more money. Money can’t buy happiness, sure, but it sure as hell makes life easier.

We’re going to help you along this side hustle journey on a regular basis. Sign up for the newsletter and get the updates delivered to your inbox weekly.

Let me know how you’re doing in the comments and let me know what you think of the whole side hustle concept.

PrevPreviousBeat Stress and Parenting with These 10 Easy Tips
NextWant to Keep Your Sanity Working At Home? Do this.Next