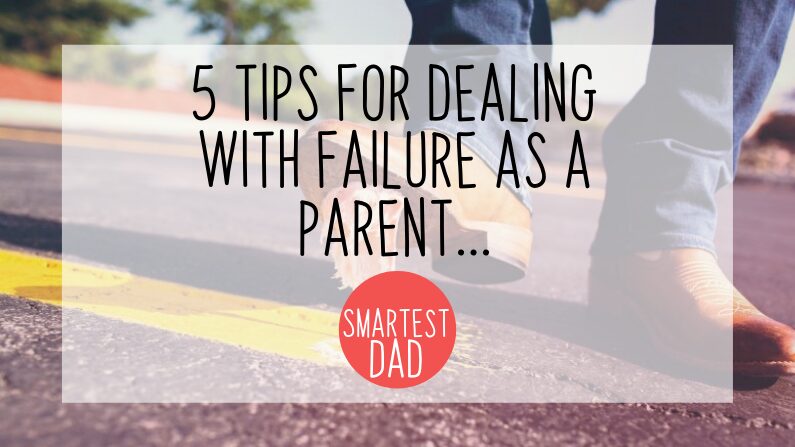 As a parent, dealing with failure is going to define a lot of our success or failure.

Okay, then this post won’t be for you. For the rest of us, it can be hard parenting. So learning to deal with failure is something you’re going to have to get comfortable with if you want to be successful.

You’re going to make mistakes. You know it, I know it. We all know it. Hell, just because you had a kid doesn’t mean that you’re not you. Remember what you were like before you had kids (probably not, but there might be video evidence floating around the internet. You should search for it)?

You probably didn’t have your shit together then either. Just because you now have another life (or 2, or 3) depending on you isn’t going to magically make you any more effective.

What this means is that you’re going to fuck up.

You’ll make the wrong choice at the wrong time. Your kid might get hurt, or miss an opportunity. But I’m here to tell you something… it’s okay. You’re still here, and your kid is too. As long as that’s your floor, you’re going to be alright.

1. Keep Your Eye On The Prize

And what is the prize exactly? In my opinion the prize are some well adjusted kids. Failing that, as long as the boys are breathing and well fed. Some days that’s all you can hope for.

But no matter what’s going on in our world I try to keep some perspective. Sure, I might have lost a job opportunity, but the boys are alright. They’re warm, they’re safe, and if I’m very, very lucky, they’re in bed.

2. Self Improvement is Key to Dealing With Failure

I tell my students that we’re trying to make them “lifelong learners.” That also means that we want them to learn from what they do in their lives.

I try to keep that spirit with me when I fuck up while parenting. If it is designated a “fuck up,” then that probably means that I don’t want it to happen again. So what went wrong? What went right? I try to figure out what happened in the situation. Making it concrete is one of the only ways of dealing with failure.

Even if I feel guilty about doing the wrong thing, at least I can walk away from the situation with a better sense of what I would do in that situation next time.

I don’t know about you, but one of the things that I never liked growing up was the mystery of it all. I have no idea how much my Dad makes, where the money comes from, or how it gets spent. So I do things differently.

I might be poor, but my kids are going to know we’re poor dang it.

In this modern economy I don’t think I can do any better than to raise my kids with a sense of how things work. Now, I mean, I try and keep it age appropriate (which leads to some other mistakes here and there).

But I do think my kids ought to know what’s going on, and how it all works. If they get hurt, they know where the ice is. If we can’t buy a toy, they know why.

[M]y kids are going to know we’re poor dang it.

Building on the last point, I ask my kids to forgive me. I’m not infallible. Far from it. I screw up. So do they.

When my kids make a mistake my wife and I make it a point to make sure that they understand what happened and to make amends. Well, when we make a mistake while parenting we do the same with them.

We’ll ask our oldest to forgive us if we foul something up. He’s a really generous person.

If, for instance, we promised movie time, but we run out of time, he’s been really good with letting us roll it to the next day. It’s not that we have to ask him to forgive us. We could just say “that’s the way it is.” But by being transparent (clear parenting… get it), and asking him to forgive us, we keep the household calmer.

There are exceptions to this rule because our 5 year old doesn’t run the house (letting a 5 year old run the house isn’t dealing with failure, it’s admitting defeat), but they’re turning out to be few and far between.

That’s what this all boils down to right?

We love our children, and they (hopefully) love us. It sure seems like they do anyway.

As a Dad I have to remember this concept girds every decision I make, the right ones and the wrong ones. As long as I’m sure that the call I made came from a place of love then I can be happy.

Sometimes I know very well that I made a choice because it was expedient, or I was lazy, or tired, or hangry… and those times it sucks when I make a mistake.

I should have known better. But the times I foul up when I was trying to do the right thing tend to bother me a lot less as long as I look for how to make improvements.

Dealing with failure as a parent says a lot about who we are as people.

Ultimately we’re all going to make mistakes. Personal ones, and ones on behalf of our kids. There’s nothing we can do about that. We’re not perfect beings.

But dealing with failure as a parent says a lot about who we are.

What we can do is try and move on in a smarter way, and take something from the experience. I’m trying really hard to make fewer decisions because I’m tired or lazy, and really make sure that I’m present. One of those choices is following the advice on this list and remembering that parenting is love.

Why the fuck else would anyone do it?