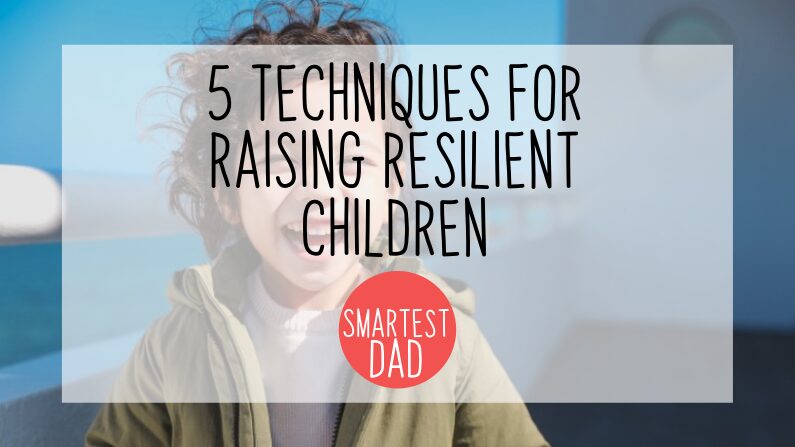 What We Need for Raising Resilient Children5 min read

How Do We Teach Our Kids to Bounce Back When Life Gets Tough?

On the one hand, they’re not breakable. I’ve seen my kids do really dumb things in the name of “fun.”

Just yesterday my youngest picked up a teddy bear bigger than he was, held it in front of his face, and ran into things. I’d have stopped him, but that brings up the other issue.

If you run in to save your kids from every possible disaster you’re going to screw them up.

Every parent wants to make sure that they are raising resilient children.

Kids don’t naturally want to be that resilient though. It takes work! Wouldn’t it be easier if someone else kept an eye on you and fixed all your problems? Of course it would.

Couple that desire with the fact that kids have a tough time fixing problems themselves even when they want to and you’ve got a problem.

I’m not saying put the knives on the floor, but there has to be the chance to push boundaries. Making sure that your kid’s environment contains at least some areas to test themselves is super important.

When they succeed they build character and confidence. When they fail, they learn important life lessons.

So long as the risk is age-appropriate your kids will be better off starting the journey early.

Avoid Being the Help

If your kids are like mine they’re demanding little things. Constantly hungry, or bored, or something. It seems like they need something from me every second of every day.

“Need” is a strong word though.

I love playing with my sons, but nothing would ever get done if I catered to every single want the children have. By avoiding catering to them about everything I get things done, but they also learn that there are limits to what they can demand. Sometimes, they just have to entertain themselves and that builds resilience.

Resilient Children Will Work The Problem

I’ve been telling my son to “work the problem” since he was born. It wasn’t super effective as an infant, but it’s getting more so now. The idea here is that problem solving is an important life skill that contributes to resilience.

Things are going to go wrong.

Trying to figure out how something failed is the first step toward making an effective intervention.

As a concrete example, my son left some of his toys out in the backyard for weeks on end. The sun ate away at the plastic crap modern toys are built out of until the toys basically dissolved in the back yard. Of course my kiddo was sad that his toys were no more. But instead of dwelling on it, we worked the problem.

How could he prevent this from happening next time? What had happened to his toys? All on his own he decided that if he put them away in our garage when he was done with his outside toys they would last longer.

He had solved the problem! Now I’m just left with trying to declutter my garage.

Like can be freaking frustrating. Every day there are new problems to overcome. Basically, life’s a big race to beat entropy. You can’t win, but you gotta try.

Shit’s breaking all the time. It makes one, well, mad.

Part of raising a resilient kid is getting them in touch with their emotions. There are going to be times when they get frustrated, mad, or sad while dealing with a problem, and that’s okay.

But they have to be able to recognize those emotions, label them, and then deal with them. When our older son is clearly frustrated with a problem we ask him to tell us what he is feeling.

We’ve taught him to label that emotion and make sure that he feels okay about it. We then ask him to start with a cleansing breath. That way he calms down a bit and can move on to working the problem that frustrated him in the first place. Labeling emotions is the first step toward helping kids to self-sooth.

If easy actions aren’t working, it can be helpful to create a soothing routine that your kid can execute on their own. Maybe you give them a special calming coloring book that they only use to color away the pain… There’s a better metaphor in there somewhere.

As an anxious mess myself, this one is probably the hardest for me. Experts suggest that one of the best ways to parent is to model the behavior that you want to see.

Do as I do is apparently better than do as I say. It’s hard to remain calm, work a problem, and hold it all together sometimes. But you’re a grown ass person. Imagine how tough it is for your kid.

They don’t have all the life lessons and coping skills you have. All they have is you. So the more you can model resilient behavior the more likely it is that your kid approaches life’s lemons as an opportunity to make lemonade.

Raising resilient children is up there in the pantheon of Dad jobs, for sure. You want your kids to be happy and confident. You want them to be able to bounce back when life knocks them down, because it will.

At Smartest Dad, we are going to touch on this subject a lot because it’s so important, and it’s a job that doesn’t end. As parents, we just hope we do enough to get the foundation laid properly, and resiliency is one of the most important bricks to lay.

But at the end of the day, parenting is hard, and we’re not perfect.

If all else fails, fake it till you make it. Heck, you might even become a little more resilient yourself.